Being productive with my Apple computers

Although this website is meant to be just about using touchscreen devices such as my iPhone and also my iPad, sometimes I have to mention the fact that I’m also using a Mac. It is all about having seamless integration between my computer devices whether they are desktop versions or whether they are my mobile devices. Wherever possible I choose iOS applications that have versions for both the Mac and also for iOS. For example, I use the application OmniFocus on my Mac and I also bought the versions to go for the iPad and iPhone. (It still bugs me that the iOS versions are not universal and that I have to buy separate versions for each device.) The same goes for iThoughtsX, Tweetbot, DayOne, Clear, 1Password and also Byword. Apart from being able to move files easily from one device to another it also makes it easier to remember how things happen because the developers try to make the applications work in similar ways where possible. So me being able to work in this way leads to less confusion. Yes it is true I am easily confused!


Blogging with the iPad using Drafts and Byword

This week I did two videos looking at ways to blog only using the iPad. On one of the workflows I used I did the whole thing on the iPad. I did all of the writing and collected all of the images and the embed codes for the video, on the iPad. I was able to get a post up to one of my websites directly from my iOS device. Some silly people still say that iPads are not good for creating content and are only good for consuming content. They obviously don’t know what they’re talking about and haven’t properly tried using an iPad or an iPhone. Next week I should do the same again, but using my iPhone 6 to prove it can also be done on an even smaller device.

It would have been possible for me to do all of my writing into the Blogsy iPad application, but I wanted to use Byword for the writing. There are formatting facilities within Blogsy, but it was easier for me to write it in markdown and then to export out the text as HTML code. Another reason why it was easier for me to use Byword is because I wanted to do some of the writing on my Mac. I did about three quarters of the article on my iPad and then I opened up the same document on my Mac and did a little bit more. Due to the application synchronising over iCloud this was very easy for me to pick up at either end and continue working.
In Blogsy I was able to upload images ready to put into my blog post directly within the application. It is quite easy to get at these images and to drag and drop them into the post. I had forgotten that it is possible to place your picture either to the left justification, centre justification or to the right. Now that was really very handy indeed.
Posted by Unknown at 17:26 No comments:

A wealth of applications on iOS - Part One

A wealth of applications on iOS

Notetaking on iOS - My choices

It not good to have text and notes scattered willy-nilly in between various notetaking applications. So you don’t really want to have one or two notes that you have arbitrarily decided to put into Simplenote, then one or two notes that are in the application Drafts and then other notes which are in Byword. Even so, despite this I have a number of notetaking applications on my iOS devices. Some of them are there to be used for specific purposes and some of them are just for me to have a look at. One of the applications that I have for me just to look out for the moment it is Microsoft OneNote. It does look like it is quite an interesting application that could be very useful. I just haven’t really spent any time with it yet to see if it would work better for me than Evernote. I also have an application called Editorial which is a really clever, well featured writers application and I haven’t really worked out the best way to use it yet. There is the default Apple Notes application which I haven’t even looked at and I also have MarginNote Pro. Sometimes I just get these applications because I see that they have been offered for free for a couple of days and I get them to have, just in case. 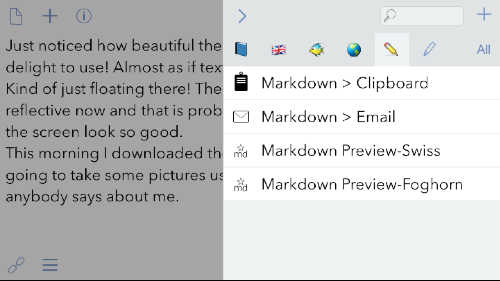 So the way that I keep notes, is like this. If I’m going to do some writing that is of a long form such as an article for a website or something that is going to be used as a chapter for a book, then I will usually start that in Byword on iOS. Mind you, that may have started off as a mind map, and has been pushed through to Cloud Outliner before I start filling in the body of the work.

If it is just a quick note and not something that is a to-do type of capture, then I will use the application Drafts. There is a chance that sometimes a note that I do in Drafts is only meant to be a quick note, but could end up as something longer so I will later move it to Byword. Sometimes it is hard to know when I get started how long or how much text I will up writing.

Read The Rest of this Article

Email ThisBlogThis!Share to TwitterShare to FacebookShare to Pinterest
Labels: iOS

A Visit to Ireland

Shooting video with the iPhone

I am getting great use out of my iPad and my iPhone, especially when I am travelling. On this trip to Ireland I recorded snippets of video here and there and I was able to edit them on the iPad while I was away. This video I edited when I got back home, but I edited the on my iPad using Pinnacle Studio. When I was why I was using the application called Replay. It does a lot of the organising of the video clips automatically and adds music, which makes it very easy and quick to use. I think I like to have a bit more control over my video editing. I could do with spending some time with Pinnacle Studio and seeing what else I can do with it to make some good video edits.
Posted by Unknown at 04:12 No comments: