I was wondering if it was possible to share from the MarkDrop application and I took a long while to find how, but it is possible. Now I want to test it to find out how many places I can share it out to.
Posted by Unknown at 15:44 No comments:

Back to Part Two

It pays to be organised and to make some good choices for how you're going to enter text. My personal preference is to dictate as much as possible and that is whether I'm using my iPad, my Galaxy S3 or my iMac. The dictation available on the Mac is the best with DragonDictate. I'm finding that for mobile dictation the better of the two is the Android service although the Siri based dictation is usable. When it comes to typing on the mobile devices then once again the Android device wins due to the fact that often I often only have to tap the screen once to put in a complete word. I love the way that it intelligently guesses the word I want next as well as the words I'm typing as I go. I really miss that feature when I go back to the iPad and I need to do some text entry with the keyboard.

Which apps to use

I prefer to use Evernote although it is a notetaking application for the curation of information I get from elsewhere. I will sometimes add text to it to supplement my collection of notes. For the quick note which is to capture an idea, on my Mac I will always use Mou as my first choice, but occasionally I remember that I have NVAlt.

Quick notes on iOS I will always use Drafts and I therefore have no requirement for any other notetaking application. It is quite good sometimes to prune away some of the unused applications from the system then I can always choose the one application to always know where to find any notes that I have made. Another possibility for taking notes on iOS is to use one of the applications that allows handwriting. Some of these handwriting-based applications will actually do an OCR so that you can at a later stage make a search through those notes. Seeing as I have scribbly unreadable handwriting I don't tend to use these applications very often, but it is nice to have them available just in case. 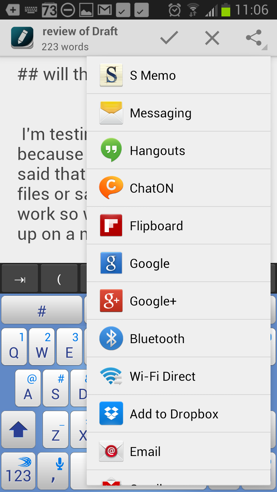 Draft notetaking app for Android is not perfect but performs the task of text entry capture very well. I have found that when I write markdown in Draft that it works perfectly, also when I share it out to use those notes on other platforms in other applications. It doesn't work so well the other way round as when I bring markdown text into Draft, it doesn't read the format very well and I lose the spaces in between the paragraphs. On a long document it would be very tedious to put them back in again so I just don't bring in markdown from elsewhere. Draft, even though it is not perfect still gets a thumbs up from NoStylus, just so long as you remember its limitations.

Go To Part One
Posted by Unknown at 02:36 No comments:

Following my defection to the Android way of doing things after years of being an iOS iPhone user, I wanted to have something that would allow me to record audio. I searched and found a number of applications, but none of them were quite as good as Twisted Wave. Eventually I found an application which looked like it might do what I needed and it is called Audio Evolution Mobile. It took a little while to get used to it, but now that I have got used to it I am quite pleased with it. It is a multitrack audio editor which allows me to zoom right into the audio wave on a timeline, so that I can make changes to the audio very accurately.

Generally I'm using this audio editor or DAW digital audio workstation for Android to edit for podcast or for Audioboo, but is also good for musicians. Mostly what I need to do, is to select parts of the audio where I have fluffed a couple of words and delete them. Then what I need to do is to get rid of the empty space by moving the recorded audio back together. Fortunately with Audio Evolution Mobile on the Samsung Galaxy S3 it is quite easy to do this sort of editing. There is a range selection tool which I haven't used very much yet, but it allows you to select a portion of your audio and do things with it. It is very easy to use the cutting tool to split a track and then to use edit tool to either lengthen or shorten the beginning or end of an audio sample.

Adding audio effects to your tracks

It is quite easy to select a track and add a number of audio effects to that track. You can add bandpass, chorus, compressor, delay, dual delay, flanger, highpass, lowpass, noise gate, reverb, reverse delay and tremolo. So there are plenty of effects that you can choose from and you can apply to just the one track. You get to hear the effects when you mix down the audio to export it out. 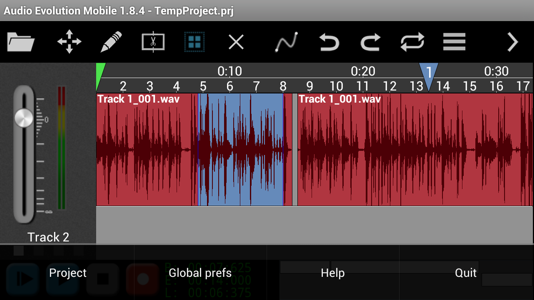 If you want to record to a specific track you can choose to arm that track and record to it. It is also possible to either mute a track so that you can listen to the others, or maybe you need to hear just one single track of all of the tracks you have recorded. There is a control for panning from left to right for a track which musicians might use, but so far I have not needed. It is also possible to adjust the gain for a specific track if you need to have it louder or quieter than the other tracks.

Adjusting the audio frequencies of the track

You get different sounds from different microphones and for example with my Giant Squid lapel microphone my voice sounds better if I reduce the level slightly at 1000 kHz. Within this Audio Evolution Mobile application for Android it is possible for me to alter the gain for specific frequencies which is a way of refining EQ settings. There are also other ways to adjust sound either for specific groups of audio or you can alter the master setting.

An overview of the application Audio Evolution Mobile

After using the application a number of times I have found it to be stable and very useful. There have been a couple of updates since I started using it and it also has become more reliable. I experienced a couple of crashes early on, but now the application seems to be rock solid. I still need to explore what can be done with the range selection tool and I have only just found out that is also possible to add markers. I can recommend this tool for recording audio on Android and it doesn't really matter that it is not possible to export out to MP3, as I can easily do a conversion of the final mix down using another Android application for converting audio called Media Converter.

Handy app that could save you money.
Posted by Unknown at 16:02 No comments: