Deciding only iOS or Android too

Only a couple of days ago I wrote a post about the switch to Android from iOS and it was generally completely positive. Now I find myself wondering just a little bit about whether I would just be better to have both my feet in one camp only. The reason for me thinking this is because there are a few applications that I use on iOS that are only available on that platform. There is absolutely no chance whatsoever of these applications being ported across to Android so if I want to just use one device then I need to stick with iOS. I have Android devices to use and that I like using, but there is something to be said by having just one device that does everything. Well it isn't going to be just one device because you want to have an iPhone because you always have the phone in the pocket and you don't always have the iPad mini with you.

listen to ‘After a year with Android - Back to iOS now?’ on Audioboo

One of the things that I really like about is the Nexus 7 is the fact that it is light and small. It is very easy to carry around. That is why I am thinking that if I was to go more towards just using iOS then I would have to buy myself an iPad mini to take over the role of what I am doing with the Nexus 7. The only thing, is the cost of all of it, in that I would also need to buy myself an updated iPhone because the iPhone 4 that I have doesn't do all that I would need it to do. I need to have a phone that will do dictation and the iPhone 4 doesn't have the capabilities. For a plan to work on moving back to iOS and Apple what I would have to be to get the phone first, maybe an iPhone 6 when it becomes available in the autumn of this year and to continue using the old iPad that I still have available. It will be interesting to see if I get tempted by any of the updates from Apple of the iPad range that will become available later on this year. The other possibility that could be quite good is if I continue using the phone that I have, the Samsung Galaxy S3 and to get that new iPad mini , but get the iPad mini that has a slot for a Sim card.

Omnifocus has me thinking

So what are these applications that I like using on iOS that have got me thinking that I should stick with just one platform? I have the latest iOS version of Omnifocus and now I just bought the updated version for the Mac which works well with the iPad version. For recording audio on iOS I have an application called Twisted Wave. I haven't been able to find as good an audio recorder for Android . I do have one Android audio recording application which is nearly as good, in fact it is just good enough. The only problem is, is that there is the auto gain control on the Android device which messes up some of the audio recording to a certain extent. 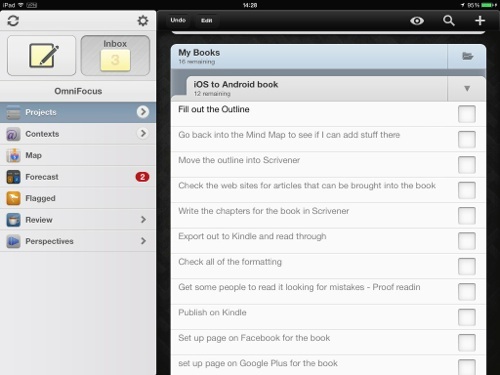 While I am in complaining mode, there is also the problem I have had lately with the camera not working on my Samsung Galaxy S3. It is not necessarily due to the camera application but down to the operating system not being completely right at the moment. It would be great if I could get the proper Android 4.4 KitKat which comes from Google rather than having to use a third party version of it. I'm using Cyanogenmod on my Android Phone which to be honest has actually been pretty good apart from the problem that has been happening with the camera just lately.

The other thing that I'm not so happy about with Android is that if I did want to edit some movies on the Android side of things, I wouldn't really be able to do so as easy and as well as I can when using iOS and using iMovie or Pinnacle Studio. So that would be another good reason for just going with iOS and the Apple way of doing things. 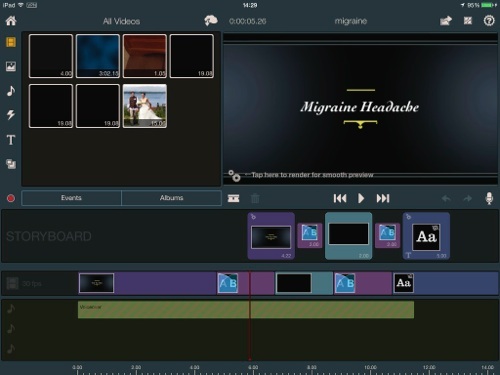 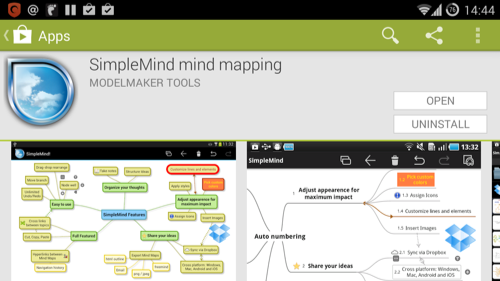 But what about the keyboard

If I really think about all the applications that I use on the Android then there is probably only one thing which is really important to me and that is the ability to use alternative keyboards. Although I didn't like it at first, now I really like the typing by sliding my finger around the keyboard. I also like the fact on the Android keyboard when you change to capitals all of the letters on the keyboard change to show the fact that you're using capital letters. These little things make a difference when you want to get some writing and blogging on Android done.

So at the moment I am in a bit of a quandary and I would have to think very carefully about whether I should buy back into the iOS world. There is quite a considerable cost involved with buying a new iPhone and also at some point in time an iPad mini. Another consideration is the fact that I still have another year to go with the payment for this Samsung Galaxy S3 with the operator . I think it is because of that – I am going to have to think about keeping with the Android phone for the moment and maybe first thinking about an iPad mini. The question then will be, do I sell the Nexus 7 or keep it around for some of my computing uses. I should say at this point is that the Android devices that I have, are actually very good and fun to use. This article I am dictating in to the Samsung Galaxy S3 and it is doing an excellent job, mind you, that could be down to the fact that I'm using the alternative keyboard called Swype which has the dictation service from Nuance. Siri doesn't do a bad job though.